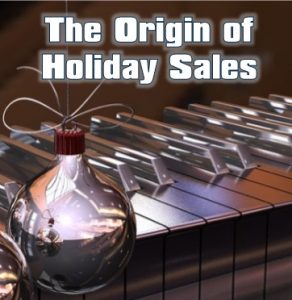 When we look back it is hard to pin down the origin of holiday sales in America, but we can see a specific trend emerging starting with Franklin Roosevelt in 1939.

Roosevelt moved Thanksgiving from last Thursday to the fourth Thursday. That may not seem like a big move, but in some years that added an extra week before Christmas allowing retailers to have more time to sell presents for Christmas.

Why wait till after Thanksgiving?

There was an unwritten rule among retailers that they should not advertise about Christmas before Thanksgiving. Many of them were chomping at the bits and jumped on the idea that so many people were taking Friday off after Thanksgiving. That gave them more potential customers, so they competed to get them in the doors.

Basically, each year large cities would host a parade celebrating Thanksgiving. It would end with Santa.  That would trigger people to think about preparing for Christmas.   That would allow retailers the opportunity to have sales immediately following Thanksgiving.

Where do we get Black Friday?

Black Friday was coined in the 1950’s with a different meaning.  It was a day that workers called in sick in order to have a four day weekend.  It was also used by Police to refer to the abundance of people congregating in town centers on that same day.

It was not until 1975 in an article in the New York times that we got the modern meaning.  It referred to the biggest shopping day of the season.  It wasn’t until 1985 that it become more widespread, even though the trend had not hit many larger cities.

The respect for Thanksgiving has been trampled by the need to get one step earlier than the competition.  It went from opening early on Friday to pushing to midnight sales and today many retailers just stay open on Thanksgiving.

A simple observation can tell us that our society is slowly creeping holidays across the entire year to better pad their bottom line. If they can keep us thinking about the next thing to buy in this ever aware digital society, they can get our hard earned money for the newest trends and electronices.

What is the point for Christians?

This year I saw Christmas decorations the day after Halloween.  We are bombarded by people trying to get our attention.  We live in a modern society that begs us to keep up with everyone else, less we become antiquated.  I mean, really, is that last years phone?!

Christians need to reevaluate the reason for holidays.  Thanksgiving is not about turkey.  It is about family and thanking God for the opportunities He has given us over the last year.  Christmas is not about gifts, it is about THE GIFT.  Christ came to earth to save us.  (How much money could we save if that was our focus?)

I don’t claim to have all of the answers.  I just want us to start a dialogue and separate our buying habits from our celebration of Christ’s birth.

If our strategy is to take advantage of every wind and wave that comes along, we are missing the boat.  As business owners, we want to make sales, but more than that, we should want to help others.

Our strategy needs to be caring for our customers, understanding their needs. If we choose to use the holidays to connect to them in a powerful way, then go for it.  Just make sure our purpose is always centered in our direction from our CEO, God.  Pray, read His Word and act accordingly in your business!

If you want to maximize sales for Christmas, focus on the real reason and act accordingly. #ChristianBusiness #Christianentrepreneur #Christmas Click To Tweet

For more info check out these articles on Wikipedia:

You may also enjoy these: